Fifty years after the world said ‘Never Again’ to the horrors of the Holocaust, genocide took place on European soil.

In July 1995, at the height of the Bosnian war, thousands of men, women and boys were systematically murdered and buried in mass graves. The victims, who were Muslim, were singled out for death on the basis of their identity.

Every year we remember the atrocity in Parliament. On Wednesday I signed the remembrance book alongside the following message:

“The profoundly shocking experience of visiting and seeing on the ground what happened and speaking to those – some of them – who suffered so much, reminds us all how far there is to go to create a fairer and more just world with international institutions that work effectively and are respected.

Andrew Mitchell, MP for the Royal Town of Sutton Coldfield”

Twenty-seven years on from Srebrenica Europe is once again a witness to darkness. Russia’s war in Ukraine resulting in the brutal deaths of countless innocent men, women and children reminds us that words too often are hollow.

Platitudes are not enough. It is only worth reflecting on the past if we are proactive in changing the future. Humanity has a lot more work to do. 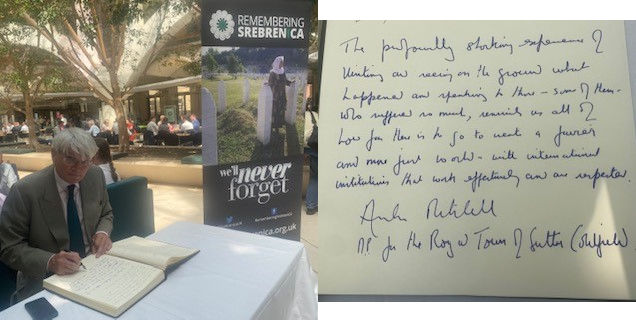