On Friday 11th March Andrew Mitchell met with Chief Superintendent Mat Shaer to discuss the state of policing in the Town. 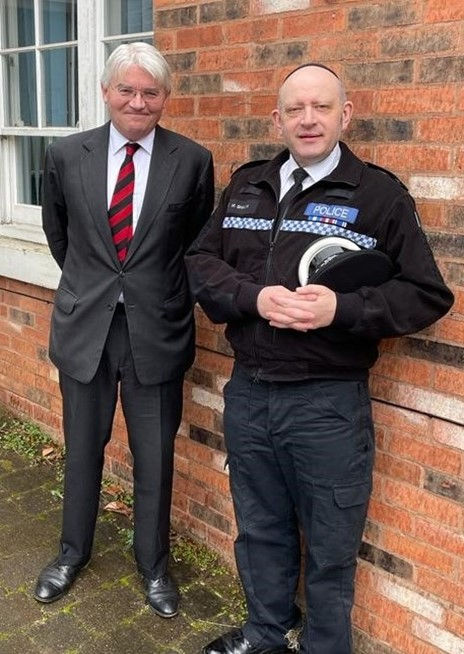 Both Mat and Andrew reflected on the positive news that crime rates in the Royal Town are falling.

Burglaries have gone down by an impressive 35% since 2020 (the last year for which comparative figures are available); robberies have fallen by 14% while vehicle crime rates have dropped by 19%.

“There has been a great deal of concern across the Royal Town about vehicle crime and I am delighted that the corresponding police campaign has proved so effective in reducing the numbers of these crimes occurring. We would not have achieved these results without the support of a stellar policing team based in Sutton.”

In addition, Mat Shaer confirmed that the Royal Town’s police station is seeing an increase in activity supported both by the robbery squad and an increased number of CID officers that are based at the Sutton station.

“This is further evidence of the appalling call by the Police and Crime Commissioner to close down Sutton’s police station. Once again, I urge him to think again and bin these mistaken Labour supported proposals. The latest

crime reduction figures show that we need to be pumping more not less police resources into the Town. We must continue to maintain an effective policing hub in Sutton Coldfield. That is what my constituents have a right to expect in terms of the policing of a Royal Town with 100,000 inhabitants.

There has also been further welcome news about the crackdown in low level anti-social behaviour and the intensification of the work being done to tackle county lines drug activity”.

Andrew Mitchell also raised with the Chief Superintendent the response times by neighbourhood police officers to complaints and enquires from local Councillors and constituents. Mat Shaer undertook to ensure that these were improved